Native Ads vs. Banner Ads: When, Why and How to Use Each

Banner ads, also known as online display ads, have been the standard for website advertising for many years. And while they can be extremely effective, they’re not the only — or even the best — way to promote your business online.

Native advertising has become increasingly popular in the past several years and offers businesses a unique way to promote their brands by sponsoring high-quality content to a targeted audience.

Below, we’ll explain the basics of both banner ads and native ads so you can make the best digital marketing decisions for your small business.

Put simply, banner ads are those that appear next to content on websites, in apps and email newsletters, and elsewhere. They appear on desktop, tablet and mobile devices, with popular sizes being 728x90 (leaderboard), 300x250 (medium rectangle), and 300x600, among others.

Banner ads are a great way to promote your business brand and bring awareness to specific marketing campaigns. Most digital marketing companies, including Swift Communications and its community brands, will optimize a banner ad campaign based on a client’s specific goals. For example, a small, locally operated business would likely benefit from running a banner ad campaign on popular websites — such as Swift’s local news sites — within its community. Those campaigns are referred to as in-network because they serve ad impressions on our websites.

Certain businesses also might want to target readers of other websites elsewhere in the state, country or around the globe. Those campaigns are referred to as out-of-network. Even though the ads will be delivered on other websites, digital marketing companies like Swift Communications and Swift Local Solutions can reserve serve those campaigns for their clients through ad networks and exchanges.

Banner advertising also offers premium spots. Web skins or wallpaper, pushdowns and peel-backs are examples of non-traditional display sizes and formats that can be effective at grabbing the attention of website visitors. These premium spots often perform at a higher click-through rate than traditional banner ad spots. 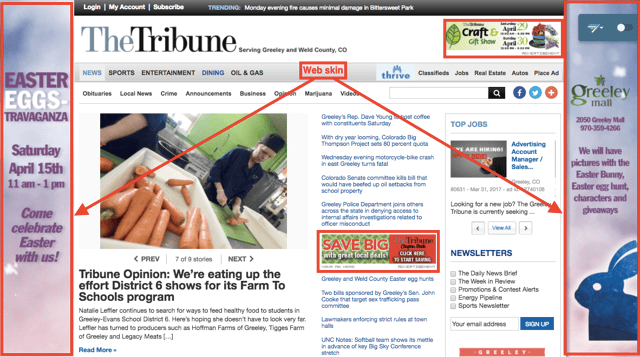 How much do banner ads cost, you might be wondering. Well, they’re typically purchased by the number of desired impressions. For example, an advertiser might want their ad to be serve 50,000 times (impressions) each month. Keep in mind the “Marketing Rule of 7,” which argues that a consumer has to see a message seven times or more before taking action. It’s important to purchase enough impressions to ensure your campaign is successful. In most cases, you’ll want to purchase at least 50,000 per month and more if you have a broad audience. More advanced targeting options are available and typically increase the cost of the campaign.

The effectiveness of banner ad campaigns is measured by the click-through rate, or CTR. In essence, that describes how many website users actually clicked on your ad. Google’s benchmark for banner ad CTR is just 0.08 percent. But your CTR isn’t the only metric worth paying attention to when running a banner ad campaign. Savvy small-business owners should also monitor Google Analytics to track increases in visits to their website, an uptick in users’ time on site, and a decreased bounce rate.

There are additional ways to track your campaign’s effectiveness, too, such as geofencing and UTM tags. Be sure to ask your marketing professional for more information on these tactics.

Unlike banner ads, native ads don’t scream “This is an advertisement!” to readers. In fact, a well-executed native ad looks nothing like a typical display ad. That’s because native ads come in the form of well-written content that matches the look and feel of other editorial content on a website or in a print publication.

The most obvious sign of a native ad is a subtle disclaimer, often next to the byline or above the headline, that states “sponsored by” or “promoted by” with the name of the advertiser. That disclosure is necessary for transparency to readers and for meeting FTC regulations for advertising.

So, why purchase a native ad? For one, they work really well. Why? Because a native ad is an article reported and written by a professional journalist about a topic of interest to the advertiser’s target audience. Instead of hoping a reader notices and potentially clicks on a banner ad next to a piece of content they were interested enough to read, a native ad is the interesting content users click on.

Some other things to know about native ads and how they differ from banner ads:

The cost of a native ad campaign varies by publisher, but they tend to be priced in a flat-fee structure that covers the cost of having a journalist write and design the content and the publisher disseminate it through the agreed-upon platforms.

Native ad performance is a big reason for the increasing popularity among advertisers. Third-party research indicates native ads are seeing by 25 percent more consumers than standard banner ads. They result in a 15 percent higher lift in purchase intent than banner ads, and 32 percent of consumers say they would share a native ad with friends and family (versus just 19 percent for banner ads). And there’s this: Readers spend an average of 90 seconds on a piece of native content. That’s some awesome engagement!

Having a hard time deciding how to market your small business online? The good news is that you have a lot of worthwhile options, and savvy digital marketing agencies like Swift Local Solutions and its affiliate brands can help devise and execute campaigns that meet your specific needs and objectives. Maybe it’s banner ads, or perhaps it’s native ads. Or maybe it’s a combination of the two.